Last Monday, we identified that whippets’ origins lay with the humble miners in the North of England, who bred them for racing (as a form of entertainment and an excuse for betting), as well as for hunting (to feed the family). But it wasn’t only the whippets’ ability to provide meat for the pot that made them so loved by their people. It was also their gentle nature, devotion and need for closeness, which made them trustworthy around children.

Ask any whippet owner, and they will tell you that whippets do not like to lie by themselves. Put however many whippets you want in one room, and you’ll find all of them piled up, snoozing in your comfiest chair within the hour. And where there’s a single whippet in the house (like George), he’ll look to cuddle up close to anything soft, warm and, preferably, alive.

So what’s that got to do with kids? Well, everything, really.

I don’t think I’ve mentioned it before, but England is a wet and windy country. It rains a lot, and the damp and wind combined make the air feel chilly. The cold gets worse as you go up North, due to the lower temperatures and stronger winds. Imagine what it must have been like for the poor miners of the 19th century, who very often did not have the means to heat their houses in the winter. And now imagine what it must have been like for their little children. They needed water bottles to keep warm. That’s where whippets stepped in.

The miners knew they could trust their dogs with their children, so they allowed them to jump under the covers and curl up against their tummies. Of course, the whippets were more than happy to oblige, and the kids didn’t complain either. They just tucked their little noses into their pups’ soft fur and drifted away, snuggly warm.

You may be tempted to believe that this is just an old wives’ tale, but it’s not. Whippets did, very often, serve as hot water bottles back in the old days, and I think it was a great idea. There’s something really nice about having a whippet in your bed. I don’t know if it’s because of their soft fur and warm body, or because they are such sweet creatures, but I know that I – like all other whippet owners I know – love it.

Although he’s got his own comfortable bed in our room, George likes to ‘visit’ us at night. Maybe he gets cold, or maybe he feels lonely… Whatever the reason, he sneaks under our duvet – always head first and always in the middle – and curls up with his back against my stomach. Or his dad’s stomach, he likes to change sides. He stays there for about half an hour, and then he’s off to Brianna’s room. He digs his way under her blanket and settles until the morning, when he comes to wake us up. Sometimes, if we get up first, we find him squeezed between his sister and the back of the bed, with her arms wrapped around him. Her very own hot water bottle. They look sweet and happy, and it melts my heart. It also makes me realise how lucky we are to share our lives with and be loved by a whippet.

TheWhippet is a breed of dog from the “sighthound” family, which also includes the Greyhound, the Italian Greyhound, the Afghan Hound, the Borzoi, the Saluki and a few other breeds. What all sighthounds have in common is their physical appearance (long legs and head, thin frame, deep chest), but also their keen sense of sight, which enables them to spot and not lose sight of fast-moving prey. This, combined with their amazing speed and agility, makes sighthounds remarkable and versatile hunters.

It is a proven fact that sighthounds go back as far as 6000 years. Images of greyhound-type dogs have been found depicted on ancient Egyptian tombs, vases and other artefacts dug up during archaeological explorations. 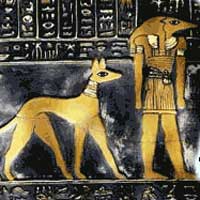 The Whippet breed, however, is a lot more recent. The 1600s are often quoted as the period when the term ‘whippet’ was first used, and the 19th century is widely considered the ‘official’ beginning of the breed, with whippets being developed and bread for hare/rabbit hunting.

It’s origin is linked to Northern England and the mining industry. It is said that the miners, who loved racing and gambling but could not afford either horses or greyhounds, took it upon themselves to develop a new breed of dog that would become their own mini-racehorse.

As far as I know, the debate about which of these theories is true is still open, but I tend to favour the latter. This would explain the many similarities in temperament between George and his best buddy Ishoo (a Yorkshire Terrier), or between him and our next door neighbour’s Jack Russell. There is even a physical resemblance between Whippets and Jack Russell terriers, especially in their facial expression, which explains why my eyes are always drawn to the “Beware of the Jack Russell” sign for sale at the pet shop.

Although originally a cross-breed, Whippets have been recognised in the UK as a proper breed for a very long time. It all started with the very
first UK Whippet Champion, Zuber (born 1889). Pretty much every English purebred whippet can be traced back to him, which is why he is considered the father of the modern Whippet breed. With the help of the very well documented Whippet Archives (and a lot of patience), I was able to check my little George’s genealogy and was pleasantly surprised to find that he, too, is a descendant of the famous Zuber.

Whatever the original mix that’s running through their veins, whippets are beautiful creatures of many uses and skills, and I hope you will
enjoy discovering some of them in my next Whippet Fact posts.

I have been toying with the idea of writing a series of interesting and, hopefully, fun facts about Whippets since I started the blog, and today I finally decided to run with it, even though I haven’t got absolutely everything figured out. Being a control freak, it took me a while to realise that, if I wait until I know exactly what I’m going to write for a whole year and I’m happy with every word, I wouldn’t get around to actually publishing anything until my 80th birthday.

So no more waiting, I think it’s time to start sharing my immense love and limited knowledge of this wonderful breed with everyone who is interested and patient enough to read my posts. And if they help even one person decide that a sweet, gentle, elegant and loving whippet is the right dog for them, then I’ll be happy.

The first Whippet Facts post is scheduled for next Monday. I know that a whole week might seem like a long time to wait, but it isn’t really. You flick your fingers and it’s gone. But, for those of you who can’t wait – one can be wishful! – I leave you with a photo of George, just to prove that whippets are rather beautiful creatures: